Here are just a few examples of coaching engagements with executives in large organizations.

Coached the General Manager in a large global information technology company who managed a business line of $50 million per year.

Outcome: The leader built, developed and managed a robust, diverse, global sales team in 15 countries and grew the business volume from $50 million per year to $2 billion. Developed greater finesse in navigating a complex political climate.

Coached the Vice President of Finance in a national technical software company as they prepared to go public.

Outcome: Represented the organization in a positive and competent light in outward facing meetings, despite challenges with the CEO. Developed and retained valued employees when there was a high potential for burnout.

Coached the Vice President of the Seattle office of a global, Europe-based marketing technology company.

Coached a member of the Senior Leadership Team responsible for Service in a large global medical technology-manufacturing firm.

Coaching focus: Addressing long-standing issues with other members of the leadership team, expanding participation with the same team, and clarifying career development goals.

Outcome: Resolved several areas of conflict and found ways to work around the ones that remained. Moved from a North American focus to a role in Global Services, leveraging more of the leader’s strengths to bring more value to the organization.

Coached a member of the Senior Leadership Team of a large medical technology manufacturing company, who was co-leading Research & Development with another leader.

Coaching focus: Managing the complexities and political nuances of shared leadership of R&D, implementing a re-organization of the department, communicating vision, and being a more visible leader.

Outcome: The leader developed greater executive presence and collaboration skills and was highly respected for this. Carried the executive team’s vision into R&D and generated necessary organizational alignment.

Coaching focus: Developing greater executive presence and influence, greater assertiveness in driving for results, and developing a framework for prioritizing and delivering on goals in a highly matrixed organization

Outcome: Became a much more vocal and visible leader, used the strength of existing relationships to drive for deliverables, and used assertiveness and organization tools to delegate more effectively and establish a better work-life balance.

Coached a Senior Manager and Innovator in a large, global consumer product company.

Outcome: The leader’s communication is now tailored to generate support and minimize antagonism. The leader has built strong alliances with key, diverse stakeholders and has successfully led the development of a product that is expected to revolutionize the industry.

Take a look at 4 more examples below. Each one of these is an in-depth case study.

Expand your Enlightened Edge with these resources!

70 tips to Expand Your Personal Power

12 ways to Lead in a Time of Crisis

YES! I want these tools 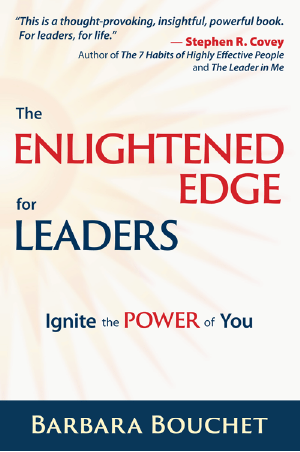